Traps is a skill and a class of items that can be placed on the ground and subsequently triggered by anything that moves over them.

“ Allows you to plant and disarm increasingly more powerful traps. The higher your skill is the harder your traps are to spot and disarm. Also increases your chance of spotting traps. ”

Most traps cannot critically hit, but bear traps are an exception. Like other crit-capable attacks without explicit critical stats, they use the default base values of 5% critical hit chance and 100% critical damage bonus.

Traps can normally only be placed while out of combat, but Quick Tinkering allows you to arm your next trap instantly, even in combat in which case it will cost 25 action points. As of version 1.0.3.13, arming traps no longer has a cooldown.

To place a trap, the player needs some points in the traps skill, the amount depending on the type of trap being used. Placing traps within the sight of friendly or neutral NPCs may provoke hostilities. Non-player characters aren't directly seen placing traps, but there are traps placed all around the Underrail nevertheless. 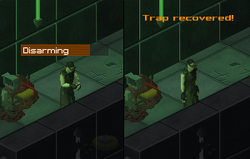 A trap being disarmed and recovered.

Traps can only be disarmed while out of combat. Traps must be detected before a disarming attempt can be made. Disarming traps takes 10 seconds just like arming them does. Traps cannot be disarmed in turn-based mode.

Some enemies may also try to disarm your traps if they can detect them. Trap detection and disarming difficulty (for both player traps and traps found in the game world) is not the minimum skill requirement on the trap item. It is based on the traps skill of the character who placed the trap.

Trap detection chance is based on Detection or both detection and traps skill. There are two formulas for trap detection value, the greater of the two for the particular character is used:

The detection difficulty for traps you place is based on your traps skill and modified by the trap's detection difficulty and other modifiers like trap expert feat. Generally speaking, only humanoid and robotic enemies try to detect traps. Animals are oblivious of traps.

The level of zone control defines how well traps set by you can be tracked back to you, allowing assassination with traps but preventing indiscriminate slaughter of friendly NPCs without triggering hostilities.