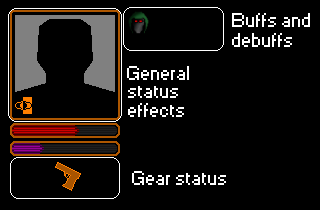 This page contains an overview of the status effects in Underrail. For more details, see individual status effect pages.

In Combat — locked in turn-based combat mode. Ends after 4 turns of no hostile actions.

Level Up — Your character has earned enough experience to advance a level. (Experience earned in Classic XP mode will be calculated from your potential level.)
Regenerating — you slowly regenerate health when above 85% HP.[1]

Underrail has a wide variety of different effects, both beneficial and malicious. These are shown to the right of your or your target's portrait.

They can be split into the following categories for purposes of interactions with many feats. (e.g. Locus of Control and Opportunist)

Stun
Stunned characters are unable to act. Stun effects cause temporary immunity when they end, so characters cannot be kept perpetually stunned.

Incapacitation
Incapacitated characters are unable to act, but any damage breaks the effect. Unlike stuns, incapacitation effects do not cause temporary immunity when they end.
Also unlike stun, incapacitation causes AI characters to lose sight of their enemies. Incapacitating all hostiles allows the player to restealth and/or break out of combat.

Immobilization
Immobile characters are unable to move. Unlike harsher disabling effects, immobilization effects do not cause temporary immunity when they end.

Other beneficial and malicious effects
These include effects from inherent abilities like Stealth Mode, assorted effects from many consumables and other items, effects from feats and psi abilities, damage over time (DoT) effects such as Bleeding Wounds and certain Poisons.
Some enemy types also have effects unique to them, for example the Psionic Synergy of psi bug groups, the Anticoagulation of siphoner's attacks and Infusions used by the Faceless.