Psionic abilities can be seen as Underrail's equivalent of magic, game mechanics-wise. They're combat abilities that require psi points to use.

Due to a recent genetic mutation, humans in Underrail have varying levels of psionic potential. No one is really sure how this genetic trait came to be, but research indicates that it is a relatively recent genetic mutation. However - it seems to be artificially designed mutation, since so many things about the mutation are just too complex and convenient to be random ones. Hal Roche argued the countrary, believing the mutation would've been way too complex to engineer with existing technology.

The player character also has this psionic potential, but it must be unlocked early on in the game by taking a pill that disables your brain's psionic inhibitor, thus granting you Psi Empathy. There is also the option of not taking the pill at all, leaving your character healthier but without any psionic capabilities.

Reckless use of psionic powers is not without its dangers. Whether its due to overdosing on psi-enhancing drugs, cerebral imprinting gone wrong or something else entirely, some psionics in South Underrail are known to turn insane and usually end up in the gang of Lunatics. At one point in Black Sea's history, psi addiction was known to be a health hazard and was treated with medical PsiDerm patches.

Some flora and fauna also have varying degrees of psionic mutations, such as the common Lacesso Gigantus mushrooms and psionic Azuridae beetles.

All characters with Psi Empathy have 100 maximum psi, as well as 5 times the number of their maximum psi in psi reserves, but also a permanent 20% penalty to maximum health. Maximum psi does not scale with any character statistics, but it can be increased or decreased with certain psi feats and items. Psi reserves can be increased from their usual 5x with Expanded Psi Capacitance feat.

Psi regenerates every turn in combat and every 5 seconds out of combat, drawing from the character's psi reserves. The regeneration scales with Will and Intelligence: psi regen = 5 + (will+int)/2, rounded down. Once the reserves are depleted, the character can not regenerate psi points naturally any more until refilling with a psi inhalant. 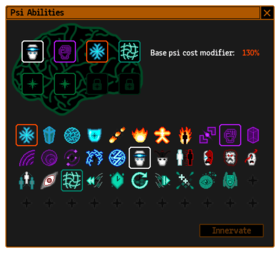 Characters have a limited number of psi slots and psi abilities must be innervated into them in the Psi Abilities menu P before they can be invoked. Number of naturally available psi slots depends on Intelligence: 2 + intelligence/2, up to maximum of 8, rounded down. Psionic headbands crafted with a Psi Circuit Extension can increase psi slots past the natural limit. Innervating psi abilities from multiple disciplines increases base psi cost: +10% for each discipline. This penalty can be altered with either Psycho-neural Flexibility or Psycho-neural Optimization feat. Changing innervated abilities removes all current psi points and reserves, and cannot be done in combat.

Effective psionic skill also lowers the chance that status effects from offensive psi abilities are resisted. Targets may resist mental effects with Resolve and physical ones with Fortitude.

Unlike most other attacks, offensive single-target psionic abilities cannot miss their targets, but some area of effect psi abilities can miss. Most targeted psionic abilities can be invoked through chainlink fences and gates, excluding physical projectile attacks which cannot pass through them (Cryokinesis, Cryokinetic Orb and Pyrokinesis.)

The use of psionic abilities can be temporary inhibited with Psi-cognitive Interruption or Black Dragon Poison.

The old psi system that was used from alpha version 0.1.14.0 up to version 1.1.1.6 (2015 March - 2020 July) is significantly different and is still available in the Legacy branch on Steam and GOG Galaxy, but receives no updates nor bugfixes.

It has no concept of psi reserves nor psi slots. Psi fully regenerates and doesn't require consumables to refill, except when needing a quick boost. Psi characters are free to invoke any of their psi abilities at any time, at normal cost.

Existing psi characters will receive Forceful Innervation feat and Psycho-neural Reconstructive Agent pill when updating the game from legacy versions. This allows legacy psi characters to use their Will base ability to determine their available psi slots, albeit with a penalty of 10 their psi points. They can use the pill and move to intelligence-based psi slots and lose the penalty. Legacy psi characters also get a generous amount of Desaturated Psionic Inhalants.

Alpha versions prior to 0.1.14.0 had no psi regeneration. Instead, will score and level determined max psi points. The changes were made to make psi cost more relevant when choosing what to invoke. Abilities that were meant to be used as primary attacks have a low cost and can be spammed without running out of psi. However, high impact abilities can run you out of psi quickly.[1]. In the early implementation of psi regeneration, between versions alpha 0.1.14.0 and beta 0.2.0.0, the regeneration did not scale with any character statistics.

Thought control discipline consists of manipulating the minds of living targets, such as overloading their brains, making them flee in fear or attack everything in blind rage. Damaging mind control abilities directly affect the mind and cannot be resisted with armor. Thought Control skill also rarely opens up new dialog choices, particularly against other mind controllers.

The Psychokinesis discipline is similar to telekinesis with additional electric powers. It can also be used to enhance unarmed attacks. Offensive psychokinetic abilities deal Mechanical or Electricity damage and may also stun targets.

Temporal manipulation psionics manipulate time on a very local level to the invoker's favor, primarily featuring delayed damage and buffing/debuffing. It functions well as a support skill that can be incorporated into other character builds, rather than a primary skill around which a build is made.

There are two primary ways of learning new psionic abilities: either have a skilled psionic teach you, or use cebebral imprinting technology in the form of a Psionic Mentor device.

There is a trainer of each psionic discipline in South Gate Station.

You can also learn Bilocation from the Mysterious Pillars in Silent Isle.