“ This jet is for those who got a lot of heavy baggage and a lot of time on their hands. The Biocorp Industries Freighter is a sturdy, affordable jet with two engines and two batteries, and o-kay protection. It's heavy and it's slow, but even with stock components it'll never struggle no matter how much stuff you've stuffed in it. ”

With slots for a large and a medium engine, only the Devastator can rival freighter's engine power potential, but it is the slowest jetski available at only 45% speed modifier. It has mediocre 300 durability, but its relatively high cover and damage resistances are only surpassed by dedicated naval combat jet skis.

The freighter is notable for its unique ability to Tow small naval vessels, such as other jetskis and even small submersibles. Its cargo carrying capacity is unmatched due to the ability to tow another loaded jetski, although the freighter alone is slower hauler than heavy jetskis with near equal engine power. 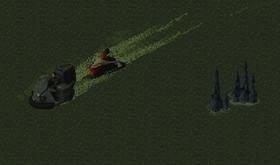 The freighter towing another Jet Ski

A freighter is sitting outside Ray's shop at Core City east docks. It can be stolen or bought once Ray returns to his shop.