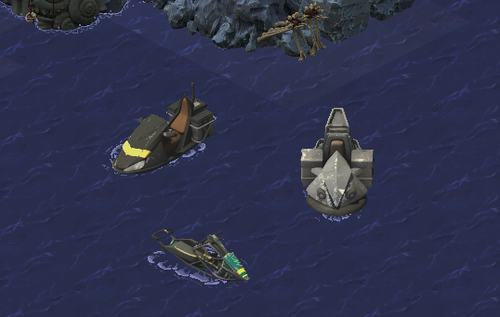 Jet Skis are a class of player-pilotable vehicles available in Underrail: Expedition expansion.

There are 15 different jet skis, ranging from super light racing jet skis to mini-destroyers, which you can further customize under the hood by installing better engines, batteries and suspension systems. The models themselves differ way by the combat cover, durability, stability, speed, damage resistances, as well number of and maximum size of a parts you can install into them; some vehicles can have multiple engines and/or batteries. Also, some jet skis will have special attacks or abilities.

Once you get to the Black Sea it won't take long for you to get a hold of the most basic "junk jet", but to get the quality stuff, both in terms of the jet ski model and the parts, you'll have to spend a fair amount of charons at Ray's shop in Core City east docks. You'll also have to decide what are the most important characteristics of jet ski for you, as no one model will be best at everything.

Some jet skis will also have weapons of their own.

When an attack is aimed at you, it has a chance of hitting the jet ski instead (or in case of AoE attacks, a percentage of the damage hits the vehicle), depending on the cover it provides, in which case the damage is tested against its resistances and the amount that penetrates those is deducted from the vehicle's durability. If the durability reaches zero, the vehicle is destroyed and you die (you never learned to swim).

Characters can improve their naval combat performance (mainly the effective stability of their vehicle) through training and suitable equipment.

Note that the speed values are for unmanned vehicles stripped of all parts. Actual performance depends on engine power and total weight, including all installed parts, the rider's inventory and items in the jetski's trunk.

Vehicle parts allow you to customize your ride. All jet skis require at least primary engine and primary battery installed to function. Secondary parts and suspensions are optional.

See Vehicle parts for an overview of all available parts.

Energy
Shows current stored energy and the maximum battery capacity. When the vehicle runs out of energy it will engage the auxiliary power and move extremely slowly.

Engine Power
Engine power determines how fast the vehicle will move under certain weight. The number represents the maximum total weight (including the vehicle parts, items in the trunk and the driver) the vehicle can take on and move at the nominal speed for the vehicle type.
Having excess or deficit of power will modify the vehicle speed accordingly.

Consumption
Some engines are more efficient than others. The number represents the effective engine power when it comes to determining the energy consumption.

Energy per tile
The amount of energy the vehicle consumes when it moves the distance of one kilometer. Some engines are more efficient than others.

Base Speed
This is the base speed for the vehicle type (e.g. standing jetski). This speed is further modified by engine power, loaded weight and the chassis aero/hydo-dynamicity.

Speed Modifier
This is the speed modifier of the current vehicle chassis. Some models are more aero/hydro-dynamic than others.
Positive speed modifiers are only applied if the vehicle is not out of energy and is not carrying more weight than it can normally support with its engine.

Unmanned Speed
This is the current theoretical unmanned vehicle speed.

Speed
This is the current actual vehicle speed. Shown when accessing vehicle menu while riding one.

Stability
Stability indicates how stable and easy to do combat from the vehicle is, influencing both ranged and melee (though to a lesser degree), as well as throwing, precision.
Precision of melee attacks is further modified by the vehicle's maneuverability, and precision of short range melee weapons (knives and fist weapons), as well as unarmed attacks, is further reduces by additional 10%.

Cover
The chance that the incoming attack will hit the vehicle instead of the driver.
In case of an area of effect attack it represents that amount of damage that the vehicle will bear in driver's stead.

Resistances
The armor either absorbs the amount indicated by the percentage OR the flat number, whichever will result in more damage being absorbed.
The unabsorbed amount reduces the vehicles durability.