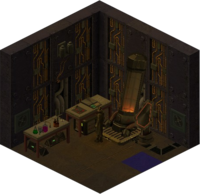 “I am a creature, like you, but I am not of this world of yours. And while you are submerged completely under it, I stand with one foot in it and with the other outside. ”

Godmen are a race of advanced beings from another planet, though they keep a significant stake in this one. They possess potent psionic powers and cybernetic augments that make them invincible in combat, as well as the means to traverse the In-Between freely. Only two confirmed Godmen can be encountered in Underrail, those being Six and Hadrian Tanner.

Very little information about the Godmen's history is given directly, the main source being the psionic monoliths found in the underrail and Deep Caverns. They seem to experience time non-linearly, seeing it as a series of "frames" where outcomes are certain but events leading up to them are not, similar to how Dude experiences visions.

The Godmen remained, trapped, in their own galaxy for an eon. Things from the dark empty silent expanses would creep in and exert their influence, until the Machine God sent a messenger bearing weapons to fight back with. Thus did the Eon of the Beast end.

Weaponry alone was enough to keep the outer expanses at bay, but they sought to expand their domain; pumps were built to push the edges of their galaxy, fueled by "eggs" (possibly referring to Dyson spheres), yet this was not enough to prevent their fate.

A sickness takes hold of the Godmen at some point, prompting a group of Chosen to ask the Machine God for help crossing the black seas of infinity (presumably by using cybernetics to resist the Living Air). This group arrives at Earth sometime after the Descent, and despite seeing humanity's fate, are drawn by curiosity to descend all the same.

They leave their mark on the underrail from this point, building the mysterious pillars, monoliths, and Oculus. Something kills off all but 3 of the Chosen, and Tanner possibly betrays his people.

Although their artifacts appear completely alien to the Biocorp and NFT technology found in South Underrail and the Black Sea, they don't totally eclipse it: