Difference between revisions of "Fast travel"

See Vehicles for player-pilotable and other vehicles. 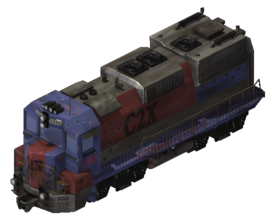 The upper metro is the residential area of Underrail. It is divided into three main metro lines - blue, green and orange. The trains don't visit all the stations on the network, so some are accessible only on foot. Upper Underrail can be accessed via Core City's main elevator.

Trains of the eponymous Underrail metro network. Drivers manuals for the C2X train engine can be found scattered around Lower Underrail.

The lower metro is consists of cargo lines for the industrial and military complexes of Lower Underrail. The trains, powered by old-fashioned locomotives, have both cargo and passenger cars. Lower metro travel is initially unavailable due to an earthquake that collapsed south metro tunnel leading to SGS, but metro travel in Lower Underrail becomes accessible the next day after player finds drill parts for SGS and the tunnel is cleared. 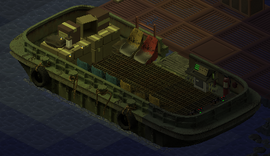 The vehicle of choice for both cargo and personnel transfer via the natural underground streams and lakes in the Caves below Lower Underrail.

Ferry boat captains move cargo and personnel between major settlements of the caves for a fee, and the underground rivers are also common smuggling routes.

Available in Underrail: Expedition expansion, rifts allow teleporting from one rift to another, once the player has learned the secrets of Second Sight with Dude during Dude's other quest. The player must "attune" themselves to a rift before they are allowed to travel back to that rift at a later time. The rifts are only visible when the player is under the effects of Second Sight and in very close proximity. Thus, the player must be under its effects in order to travel via the rifts.