Foundry is the industrial heart of Lower Underrail.

Foundry is famous and widely respected for its strong heavy industry. It has the only working metallurgical facility in the entire South Underrail. It produces all manner of metal components, including weapon and automaton parts. It's particularly famed for its TiChrome alloy. It covers the entire South Underrail market with these and also exports heavily to northern regions.

Foundry also ranks as the safest of all places in South Underrail, and perhaps the entire Underrail when it comes to outside threats. This is due to the station being heavily fortified and their guards highly trained, well equipped, and numerous. Their troops are also battle-hardened due to their frequent skirmishes with their hated enemies, the Ironheads. Foundry's justice system is also one of the more civilized ones in the relatively wild South Underrail.

Citizens of Foundry are quite wealthy in comparison to other Southerners and enjoy certain social benefits rarely seen in other places, such as life insurance, free health-care and pensions. Despite all this, Foundry is not a good place to live. The pollution levels are off the charts and working conditions are quite hazardous. People die regularly from cancer, heavy metal poisoning, and workplace mishaps.

It's ruled by the democratically elected Mayor who manages station internal affairs along with independently elected Chief of Security. They adopted isolationist political philosophy where they do not meddle in affairs of others or take part in inter-station events, but also reject all attempts by other stations to influence them. They do not hide their distrust of the Protectorate, but are willing to do business with them just as much as with any other station. 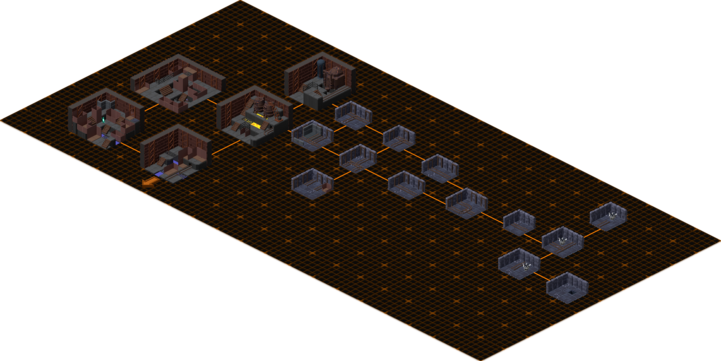 Click on any zone to see the map image. Click on the arrows to move to a different map.

The main street of the town. Most shops and services are located in here.

West of the main street. A couple more shops, some residential buildings and the town hall are located here.

The northwest corner of the town.

Below the residential area are slums.

A tunnel connecting the bunker with Evelyn's home.

A bunker located under Evelyn's home. Should you end up here one way or another, you can find Evidence of Murder for Foundry murders quest.

The main furnaces where ore and metal is smelted. North from main street, east from residential area.

Further north from the furnaces and further away from the residential area is a huge and powerful old electric arc furnace. You will need to fix Gloria in order to kill the Beast of Foundry.

Foundry has its own high security prison.

The mines where Foundry gets its ore. East from the furnaces.

A cave deep within Foundry mine, filled with crystals and rock creatures which the locals call Borers, Bladelings and a huge one simply called the Beast of Foundry.