South Gate Station, also known as SGS, is the home station of the player.

South Gate Station is the first major urban location and also the first major station of the Underrail metro network in the game. It is an old military installation consisting of nine floors, the topmost being at the level of Lower Underrail and the deepest parts reaching the caves below the Underrail network.

South Gate is an autonomous community and not a member of United Stations, but could become its first member in south Underrail. It is the most powerful station in the entire south Lower Underrail. It has its own internal currency, SGS Credits, but Stygian Coin is also accepted by the merchants of South Gate. The station maintains peaceful trade relations with United Stations Embassy, Rail Crossing and other major settlements in south Lower Underrail.

South Gate Station is ruled by a council of three - Hadrian Tanner, Vera Hale and Gorsky. The council holds meetings and discusses important political and security matters with other key members of the community such as Ezra, Old Jonas and the player. Depending on the player's actions, South Gaters may become involved in a gang war over the control of Junkyard.

Details of each level in the stations.

This level contains the tutorial area and a shooting range and armory where you can buy weapons. It is a tightly guarded area; all of SGS's munitions are stored here.

In addition to commons and cantina, Tanner's office is also on this level. You can meet many south gaters and other characters loitering in the cantina at different times. 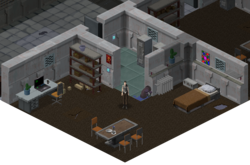 Your Private Quarters on SGS Level 5

Private quarters of the SGS residents.

After a short introduction scene, you start the game in this level, in your own private quarters. People usually don't loiter around here, so this level is mostly deserted during day time. Some loot can be found in the other rooms, but opening their doors requires rather high lockpicking or hacking skills.

Notably, one of the vacant rooms belonged to late Patrick Pierce and can be accessed only with Patrick Pierce's Room Key while investigating Pat's death for his brother.

The medical level and gymnasium. Expect to visit it often if you have a tendency to get hurt, as Dr. Pasquale can heal your wounds without depleting your own precious medical supplies.

Both the engineering and cyber labs sections are located on this level.

This level contains the agronomy section and cave hopper pens. Most of South Gate's food comes from here.

This level has two exits. A tightly guarded airlock leading into the south caverns and Crossroad Watch. Another exit leads to the docks with a boat ferry.