Difference between revisions of "Armor"

For a complete list of armor items, see Category:Armor. 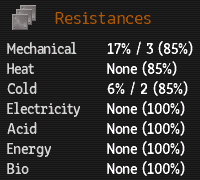 Armor in Underrail reduces damage via one of two mechanics, percentage-based damage resistance or flat damage threshold (DR% / DT). When you take damage, your armor will either reduce it by the amount specified by the damage resistance or by the flat amount specified by the threshold, whichever is greater, not both.[1] Thus, higher DT is better against faster attacks that deal less damage (such as SMGs, knife attacks, etc), while higher DR% is better against heavy attacks (snipers, sledgehammers, etc). Since version 0.1.14.2, player's Mechanical resistance is capped at 95%.

Some armors are specialized against certain attack types and their resistances and/or thresholds are increased against those. (e.g. Mechanical damage threshold of Tactical Vests is increased by 200% against bullets.)

Damage taken will also be reduced (or increased) by the damage modifier percentage. It is counted after any DR% / DT provided by armor, so it stacks multiplicatively with armor resistances and works against armor-piercing attacks. Some armors provide small amounts of damage reduction in addition to their DR% / DT. Many items, consumables and feats also provide damage reduction. Certain effects increase the damage modifier and thus increase damage taken.

Armor penalty is an important property of all armors. It reduces your Dodge, Evasion, Stealth and Movement Points by a percentage. The heavier the armor is, the more armor penalty it has. Total armor penalty is capped at 95% for most purposes, with the exception of feats such as Nimble. Armor penalty does not reduce movement points provided by temporary bonuses, such as Sprint.

Since version 0.1.7.0, most armors and weapons have durability. You must either buy or craft repair kits that can be used to keep your equipment in working order. Once an armor's durability has been degraded enough, your UI will notify you that you have Damaged Armor and the armor will provide reduced bonuses, or no bonuses at all in case of Heavily Damaged Armor. Armor that has reached heavily damaged status or zero durability provides no bonuses, but they can still be repaired back to normal. Any equipped heavily damaged armor still provides any penalties it may have. 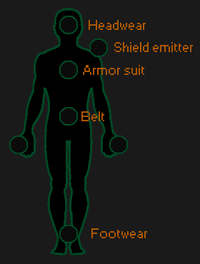 In addition to helmets and balaclavas, useful gadgetry like goggles can be worn on head. The craftable headwear types are Balaclava, Goggles, Psionic Headband and Metal Helmet.

Shield emitters provide your character with an energy shield when powered. Energy Shield Emitters are craftable and do not suffer from limited durability, but require electrical energy.

The main piece of your protective armor, encompassing your character from shoulders to ankles. The craftable armor suit types are Leather Armor, Tactical Vest, Riot Gear and Metal Armor.

Belts grant extra utility slots and various other bonuses. Belts are not craftable and do not suffer from limited durability unlike most other armor pieces.

Boots provide additional protection and can improve your movement speed and melee combat performance. The craftable footwear types are Boots and Tabi Boots.

Armor in Underrail can be roughly split into three types - light, medium and heavy. These are not set-in-stone limitations, but rough examples of different playstyles. Mixing and matching different types is possible and encouraged.

Light armors are characterized by zero or light armor penalty and bonuses stealth, movement and dodge/evasion.

Medium armors are characterized by specialized bonuses and medium armor penalty that allows a mix of stealth, mobility, damage avoidance and absorption as defense.