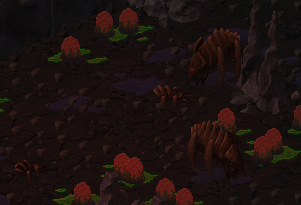 A Burrower and two Spawn inside a burrower nest.

Enemies encountered in Underrail and its expansions. These pages list all critters, automatons, humanoids and also most humans the player could be expected to fight, depending on faction and quest choices.

Most critters in the wild (and certain non-human humanoids) will respawn within two hours of real time. Plants such as Mindshrooms also respawn in the same manner. These are marked on your Global Map. Very few generic human characters will also respawn, but generally speaking human characters and robots do not respawn.

Respawning wildlife will not spawn on the same zone as the player, but will the second their respawn timer has passed and the player moves to a new zone.