This first mission in Praetorian Security questline has you locating and eliminating a mercenary leader. 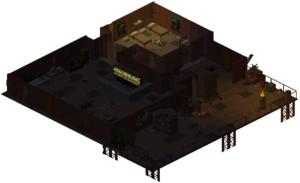 Joe De Pacino and his mercenaries can be found on Core City's middle level, at the edge of drop zone, near the Gauntlet entrance. Deal with the guard, descend into their base and kill them as you see fit.

The mercenaries are well-equipped with Shield Emitters and energy weapons, mostly Laser Pistols. In addition to Joe De Pacino, there is a Mercenary Psionic and a total of 5 Mercenary Gunners. One of the gunners is in the room west of the ladder and another is patrolling in the east. There's also a Power Box in the east. It can be used to lure one of the merc gunners out from the room where Joe is.